That is the aim of Hockey Helps Kids (HHK), as it brings together schools from across Edmonton with local charities and the Edmonton Oilers.

A huge roar erupted from the crowd of Junior High students who were eager to kick off the afternoon celebrations.

Edmonton Oilers anthem singer, Robert Clark, made a special guest appearance to help open the ceremonial proceedings as he crooned the Canadian anthem, with help from the seventh-, eighth- and ninth-graders in attendance.

“There is nothing like this across the entire NHL, you guys are trailblazers with what you are doing,” said Shipton.

Co-founded by Chloe and Harrison Katz, children of Oilers Chairman Daryl Katz and his wife Renee, the Hockey Helps Kids initiative provides students in Grades 7 to 9 the opportunity to learn about the importance of being active members in their community.

The team with the most votes at the end of the Charity Cup Challenge will win $25,000 for their designated charity while the four runners-up will also receive $10,000 for their local charities. 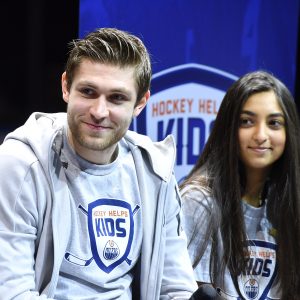 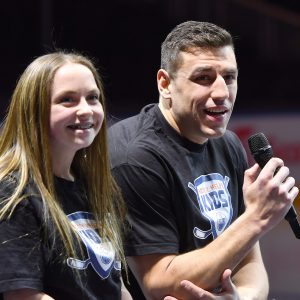 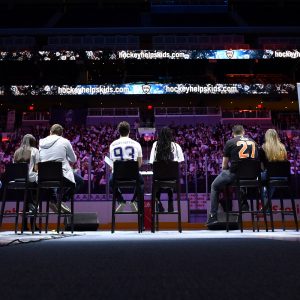 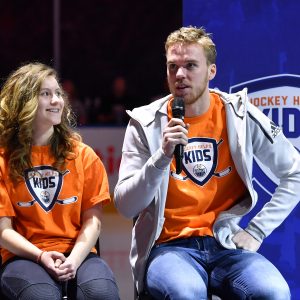 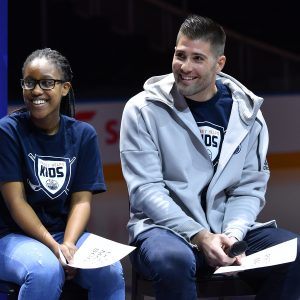 One by one, the team captains and their school representatives stepped out onto the runner to make their way to centre ice for the question period. Each student and their respective Captains approached the podium to introduce the videos they prepared, showcasing the charitable cause they selected to support this season.

“It was a lot of work, but I think at the end of the day we pulled through,” said Mielere Ramadan, Team Nugent-Hopkins.

“We worked really hard with the video. We took our time, we studied a lot of old videos so that way we could figure out how to get ours to go, how it [was] going to work.”

Team Captain newcomers, Maroon and Draisaitl, were impressed with the level of creativity their team’s put into the fundraising ideas and video compilations.

“The kids did a really good job,” said Maroon. “You get to see this side of them, and what they put together, and how creative they were to do such a good job and get some information that a lot of us don’t know…I’m glad they’re doing it and I’m glad to be a part of it.”

“They were very well prepared for it, the work they put in, it shows off right now,” said Draisaitl.

The completion of the video unveiling at Rogers Place officially launched online voting that will run from January 31 – February 25, with each team already strategizing how they will accumulate the most votes to take the win.

“Using social media, keeping in contact, kind of getting the message out whatever way we can, spreading the word, telling friends and family, whatever we can to promote Team McDavid,” said Emily Pickering.

“It’s really fun to get to include other people from the school, it’s not just the Hockey Helps Kids class, but everyone in general — [embracing] that sense of community.”