(Edmonton, AB) —The votes are in! Father Michael Troy Catholic Junior High School captained by Oilers forward Ryan Nugent-Hopkins, has won the 2nd annual Hockey Helps Kids Charity Cup Challenge and have won $25,000 in support of their charity of choice, Sport Central. This year a total of 89,808 votes were cast within a one-month voting window, which more than doubled last year’s inaugural results. This year’s votes are a testament to the significant positive impact that the Hockey Helps Kids initiative has made in the Edmonton community. 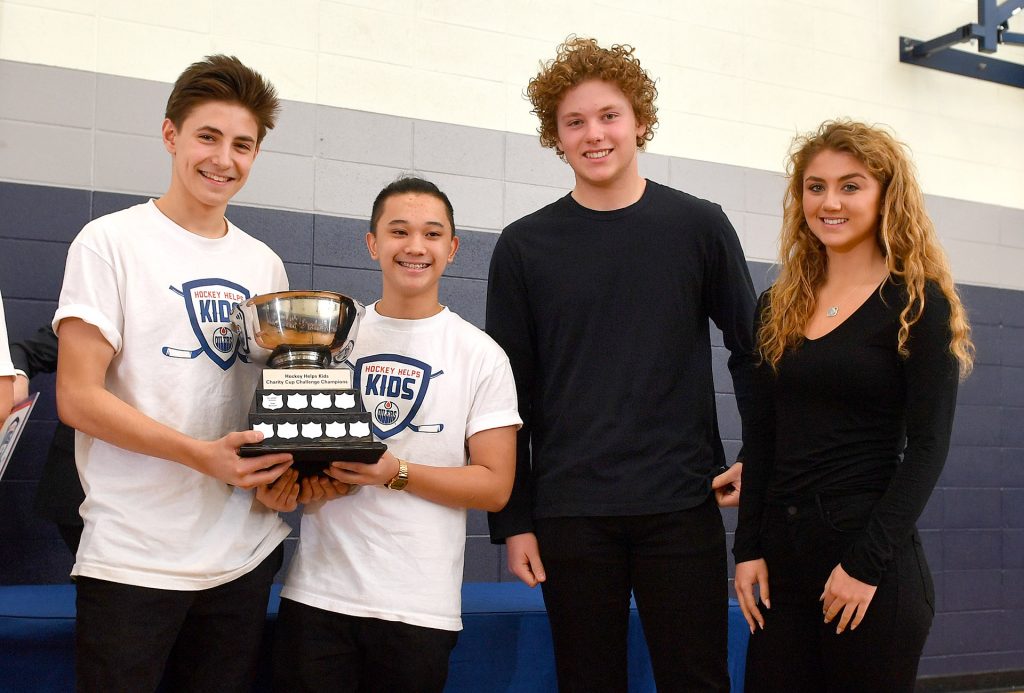 Hockey Helps Kids, co-founded by Chloe and Harrison Katz, children of Oilers Entertainment Group Chairman Daryl Katz and his wife Renee, made its debut last year and returned as a key program for the Edmonton Oilers 2016-17 Inaugural Season at Rogers Place once again. The project is funded by the Katz family and administered by the Edmonton Oilers Community Foundation (EOCF).

“It has been amazing to see how far Hockey Helps Kids has come since its inception last year,” said Harrison Katz. “To be able to double the amount of votes from last year, while continuing to engage kids in such a positive way, it’s pretty cool. Thank you to our Oilers captains as well for their commitment and passion for Hockey Helps Kids. ”

The second season of Chloe and Harrison Katz’s philanthropic journey has been an astounding success. Once again, the beginning of the school year saw students come together from four different local Edmonton schools to create a video pitch in support of their selected charity for fans to vote on.

“For us, seeing how much time and creativity that was put into each team’s awareness video was very inspiring,” said Chloe Katz. “Being an outlet of creativity for kids in the Edmonton community, while raising awareness for charities is something we are very proud of, and we are most excited to see this initiative grow and expand well into the future.”

Team Father Michael Troy and their Hockey Helps Kids Team Captain Ryan Nugent-Hopkins, created a video in support of Sport Central — a local non-profit that provides affordable sports equipment for families and children with the desire to be involved in minor sports.

The $25,000 won by Father Michael Troy will be donated to Sport Central to help ensure every child in Edmonton and the surrounding community has an equal chance to be involved in sports.

“I am very proud of Father Michael Troy and all the hard work that our team put in to win the second annual Hockey Helps Kids Charity Cup Challenge. From the start, I said that our team was determined and they truly were,” said Ryan Nugent-Hopkins.

The staff of Father Michael Troy were also extremely pleased with this year’s results. Being able to guide their students to make a lasting impact in the Edmonton community is an initiative they are proud to align with. 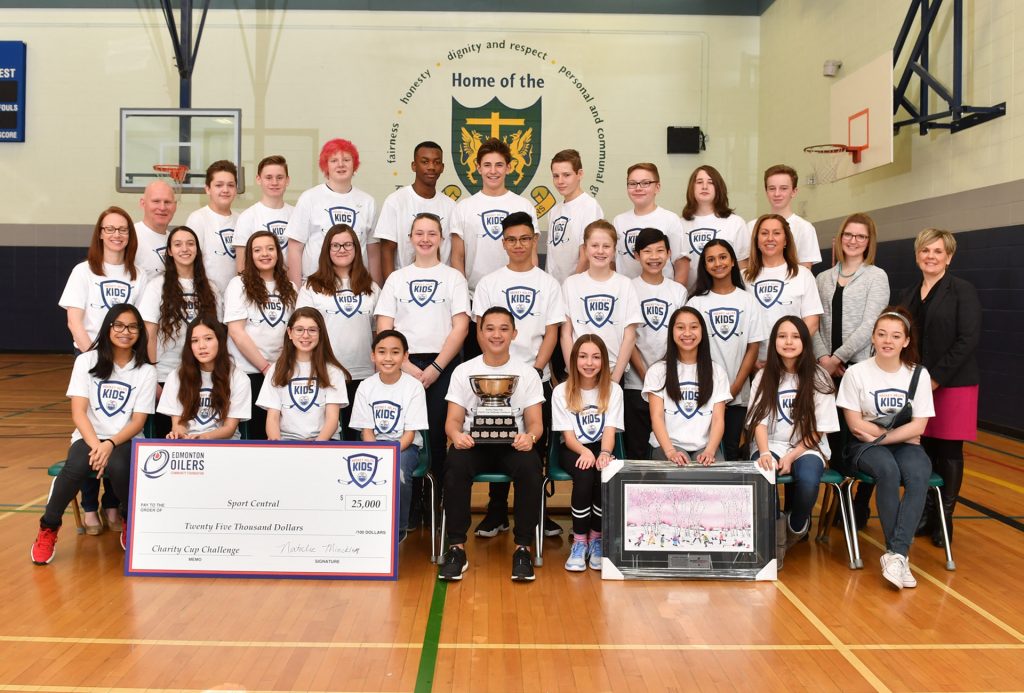 “On behalf of the students and staff of Father Michael Troy, we’d like to thank Harrison and Chloe Katz, as well as the Edmonton Oilers Community Foundation for the privilege and great experience of participating in the Hockey Helps Kids program, enabling us, as a school community, to work together to make a difference for kids in Edmonton,” said Father Michael Troy Principal Wendy Robinson. “Not only did our students learn the value of social responsibility, they learned skills that they will be able to transfer to future ventures, making them more confident in planning, speaking, marketing and working effectively as a team.

“Most importantly, Hockey Helps Kids, has given us the opportunity to build community not only within our school, but with our fellow Edmontonians and with an incredible charity, Sport Central. Our staff and students have connected with this wonderful charity, more than we ever expected, and know that a long term bond has been established.”

Although Father Michael Troy secured the win with the most fan-votes, students from John D. Bracco (Team Lucic), St. Edmund (Team Eberle) and Highlands (Team McDavid) all walked away with the runners-up prize of $10,000 for each of their charity partners, the Sexual Assault Centre of Edmonton, Guardian Angels Program in the Edmonton Catholic School District Foundation and Make-A-Wish Northern Alberta.