Hockey Helps Kids was first started last year by Chloe and Harrison Katz, when they were tasked with the opportunity by their father, Oilers Entertainment Group (OEG) Chairman Daryl Katz, to come up with a way to give back to the community.

“We wanted to do something with kids our own age,” Chloe explained.

“Because of our family’s connection to the Oilers, doing something involving hockey made a lot of sense,” Harrison added.

The initiative calls on four local Junior High School leadership teams to select a charity of their choice and develop a video pitch to drive awareness and raise funds towards their chosen charity.

The videos are then shared on HockeyHelpsKids.com and promoted during Oilers games, and fans are encouraged to vote for their favourite team/pitch in the Charity Cup Challenge. The winning team will receive a donation of $25,000 towards their designated charity, with the three runner-ups receiving $10,000 towards their charity of choice. 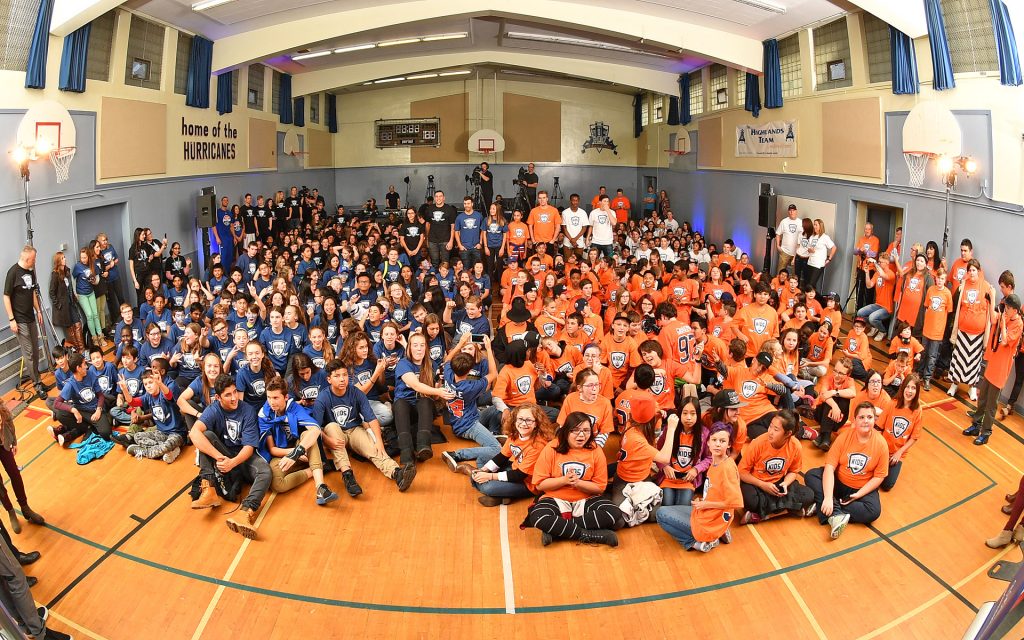 “Harrison and I are looking forward to another fun and rewarding season of Hockey Helps Kids and can’t wait to see what concepts the four new schools come up with to raise awareness for their charitable causes. We’re so inspired and motivated by all of the students’ interest in the program. It’s going to be a great year,” said Chloe.

This year, the following school teams and selected charities are:

“It’s great to get the kids involved, knowing that getting involved is the first step in making a change,” said Lucic, team captain for John D. Bracco Junior High School.

“When they asked me if I would be a part of this, it was a no-brainer for me. To work with kids like this for a great cause is something I’ve always been passionate about,” he added.

“We chose [the Sexual Assault Centre of Edmonton] because we thought that sexual abuse is a really important matter, but a lot of people don’t talk about it. It goes unnoticed because there’s a lot of stigma around sexual abuse. We want to break the stigma, and let people know it’s okay to talk about sexual abuse.”

The not-for-profit organization supports all ages, assisting those who have experienced sexual abuse and educating the public about sexual violence. 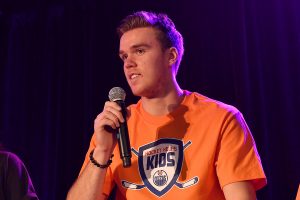 Team captain for Highlands school, Connor McDavid, said of his charity, — the Make-A-Wish Foundation Northern Alberta — “I’m hoping us, together as a team, can do a lot for them.”

The mission of Make-A-Wish Northern Alberta is to, “grant the wishes of children with life-threatening medical conditions to enrich the human experience with hope, strength and joy.”

Representing Father Michael Troy school, Caleb Sackey explained their chosen charity of Sport Central, “They take old sports equipment, they recycle it and then they give it to kids in need.”

Since its inception in 1991, the Alberta-based organization has provided over 125,000 kids with safe, gently used equipment, allowing them participate in the sport of their choice.

“I’m looking forward to getting to know the kids,” said team captain Ryan Nugent-Hopkins, while smiling at the cheering Father Michael Troy team. 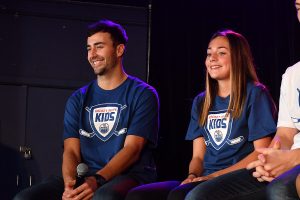 Jordan Eberle, team captain for St. Edmund, attempted to speak over the loud applause that erupted from his team when his name was first announced.

Representing St. Edmund, student Becca Campbell explained why they chose the Guardian Angels Program as their charity. They liked the appeal of the smaller organization.

“They’re a smaller charity, so we think we can get their name out there and help them a lot. We think this charity is so deserving because they help youth.”

The program assists students suffering from mental health issues such as anxiety and depression.

With the team captains assigned and the charities selected, the students will spend the next few months researching their charities to come up with an innovative and compelling video.

To learn more about Hockey Helps Kids, the teams and selected charities, visit HockeyHelpsKids.com. Stay tuned for more details on how to vote for each team’s creative video projects, which will help drive awareness towards their selected charities.