(Edmonton, AB) – Now that hockey season has begun and students are back in school, it’s time for the return of Hockey Helps Kids. Today Hockey Helps Kids launched its fourth season at S. Bruce Smith School with the help of 400 junior high students and their four team captains.

Hockey Helps Kids, an exciting philanthropic initiative that made its debut in 2015-16, is a fun and innovative charity competition, which brings together local schools, charities and the Edmonton Oilers to raise awareness and funds for a variety of local non-profit organizations. 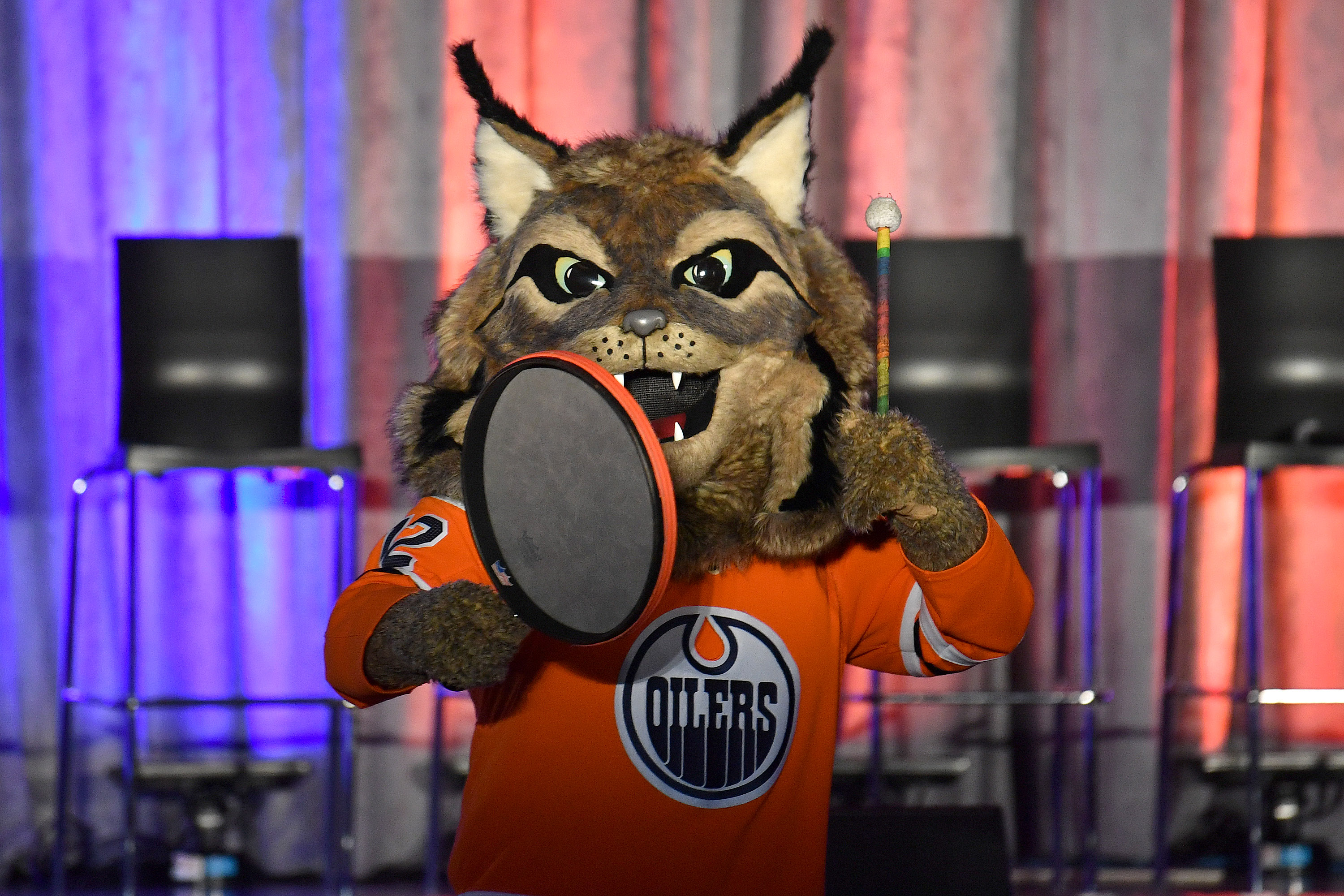 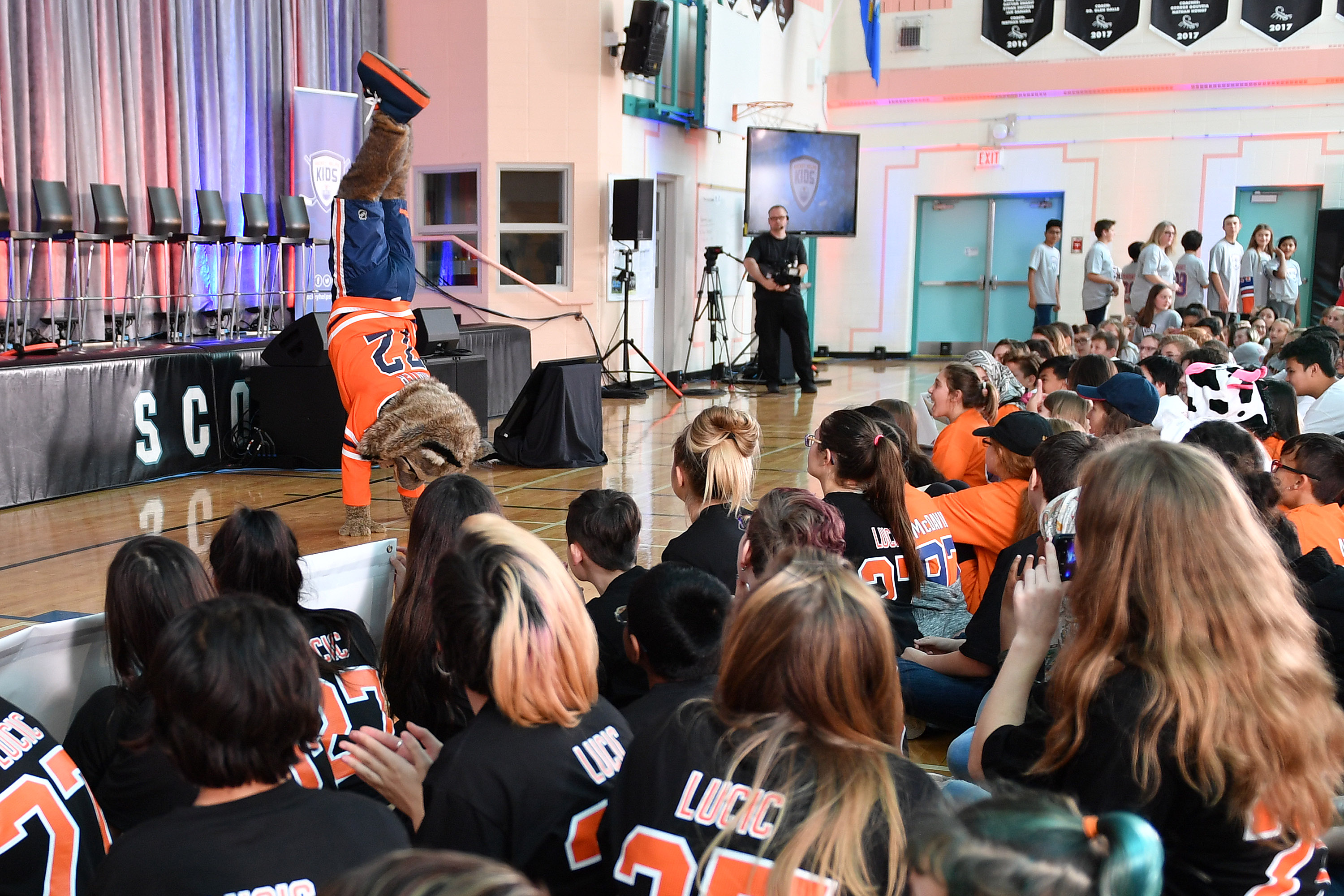 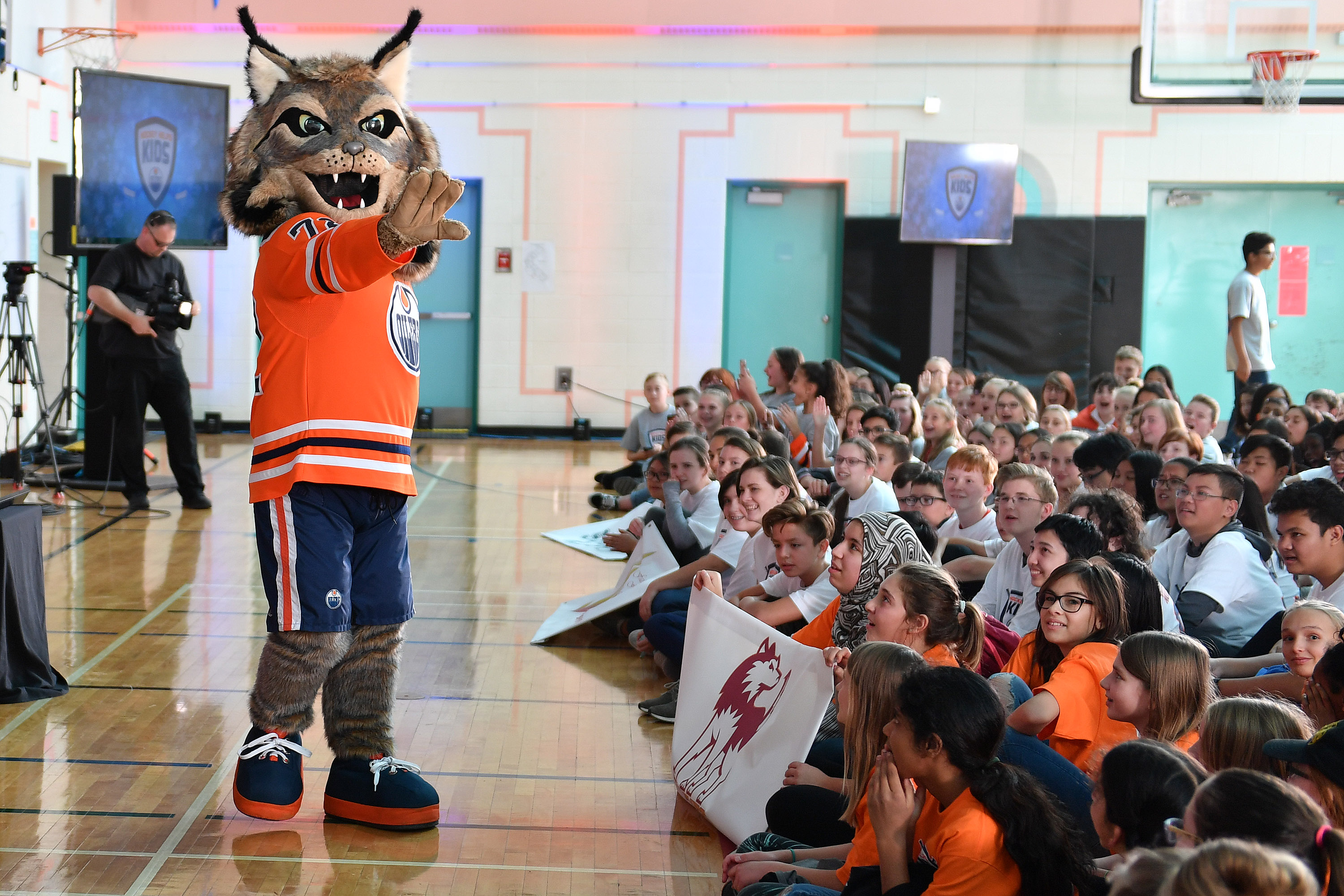 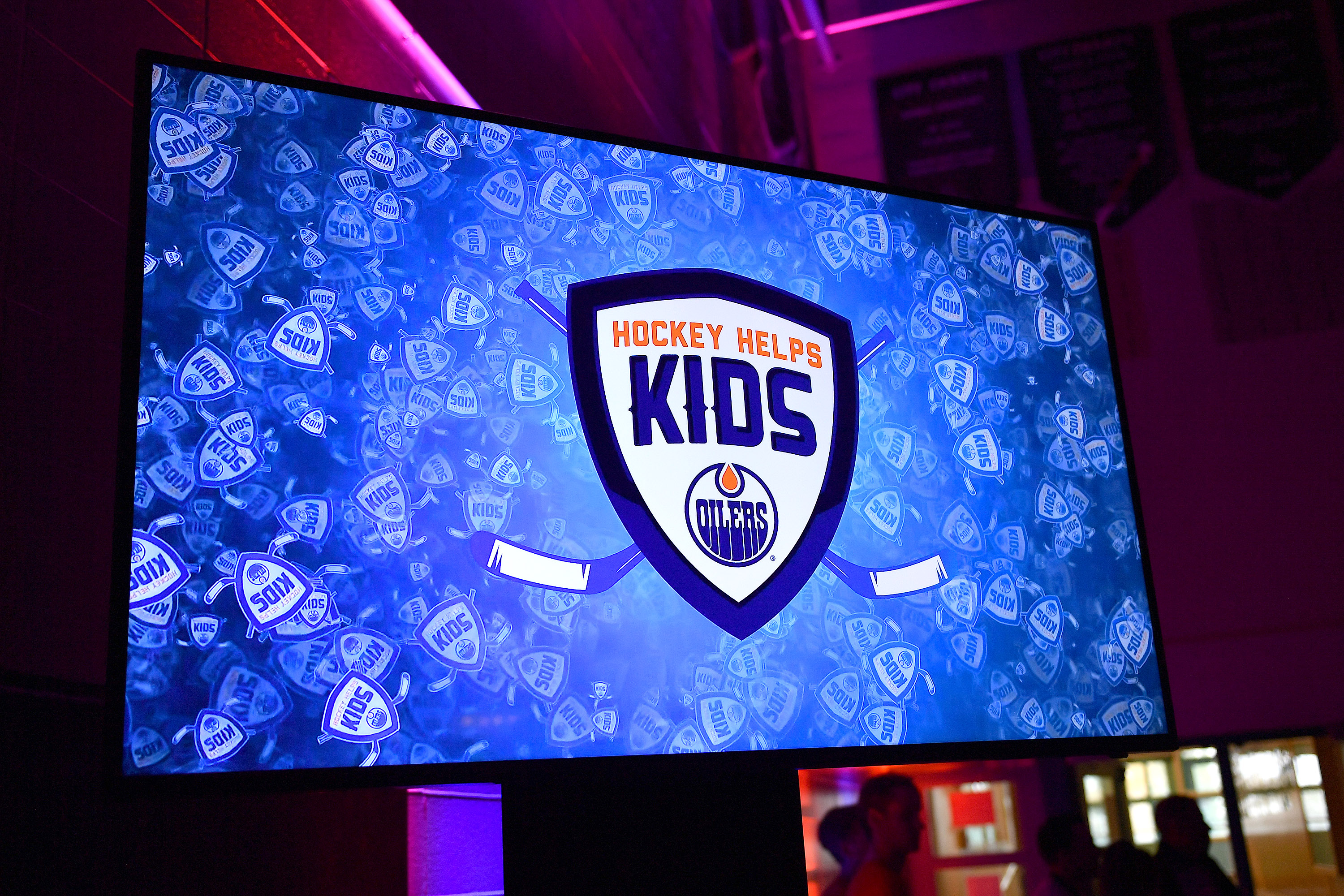 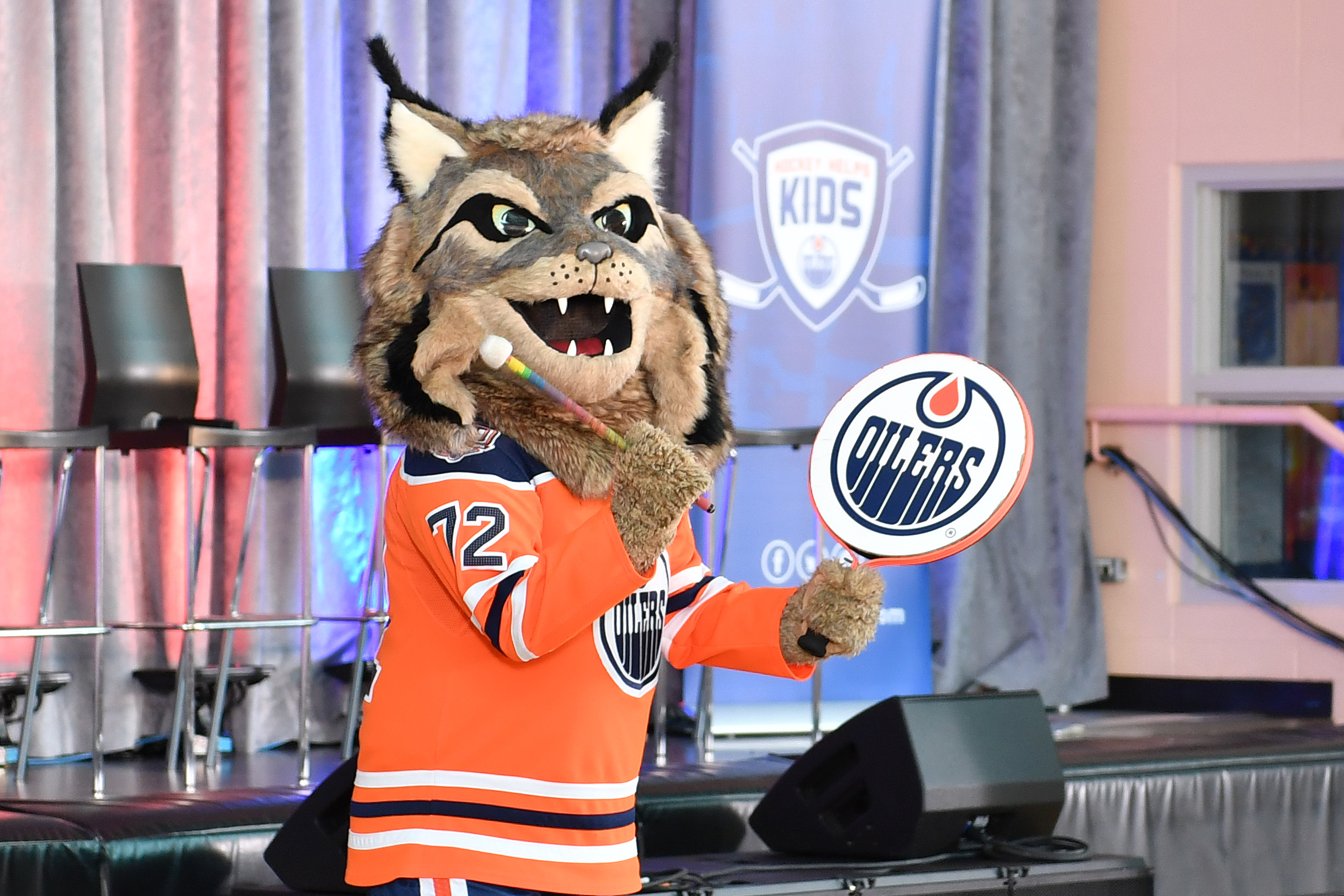 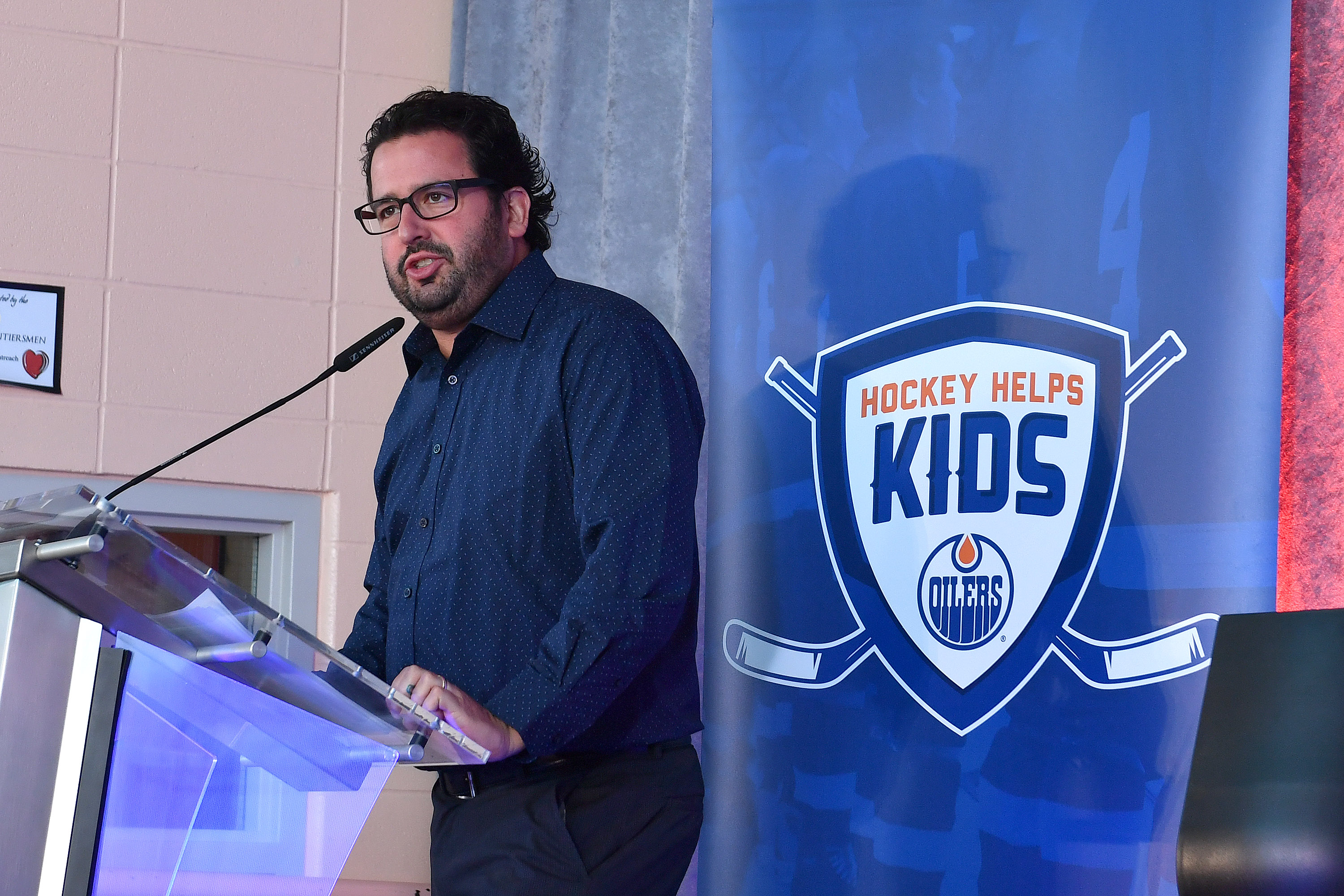 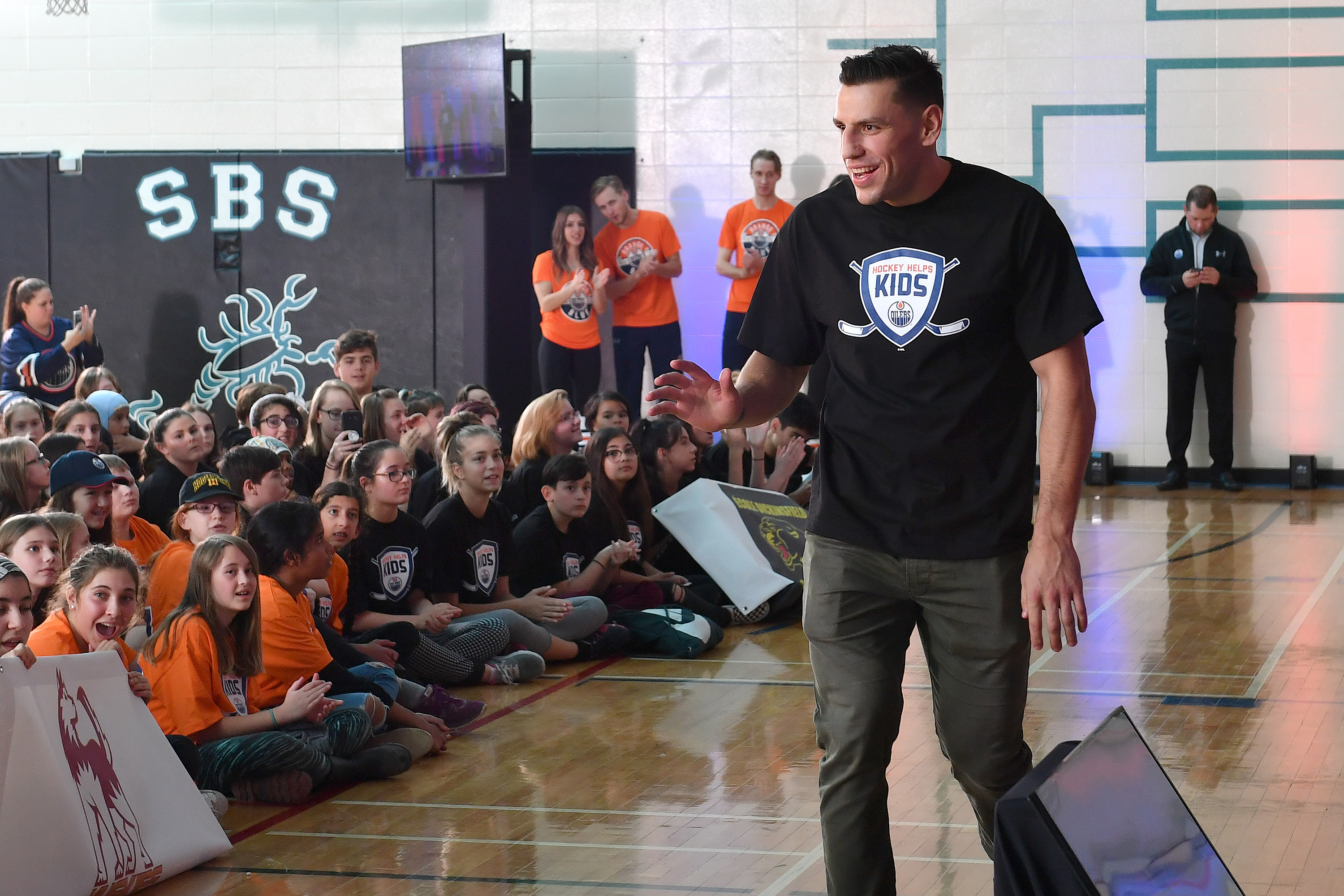 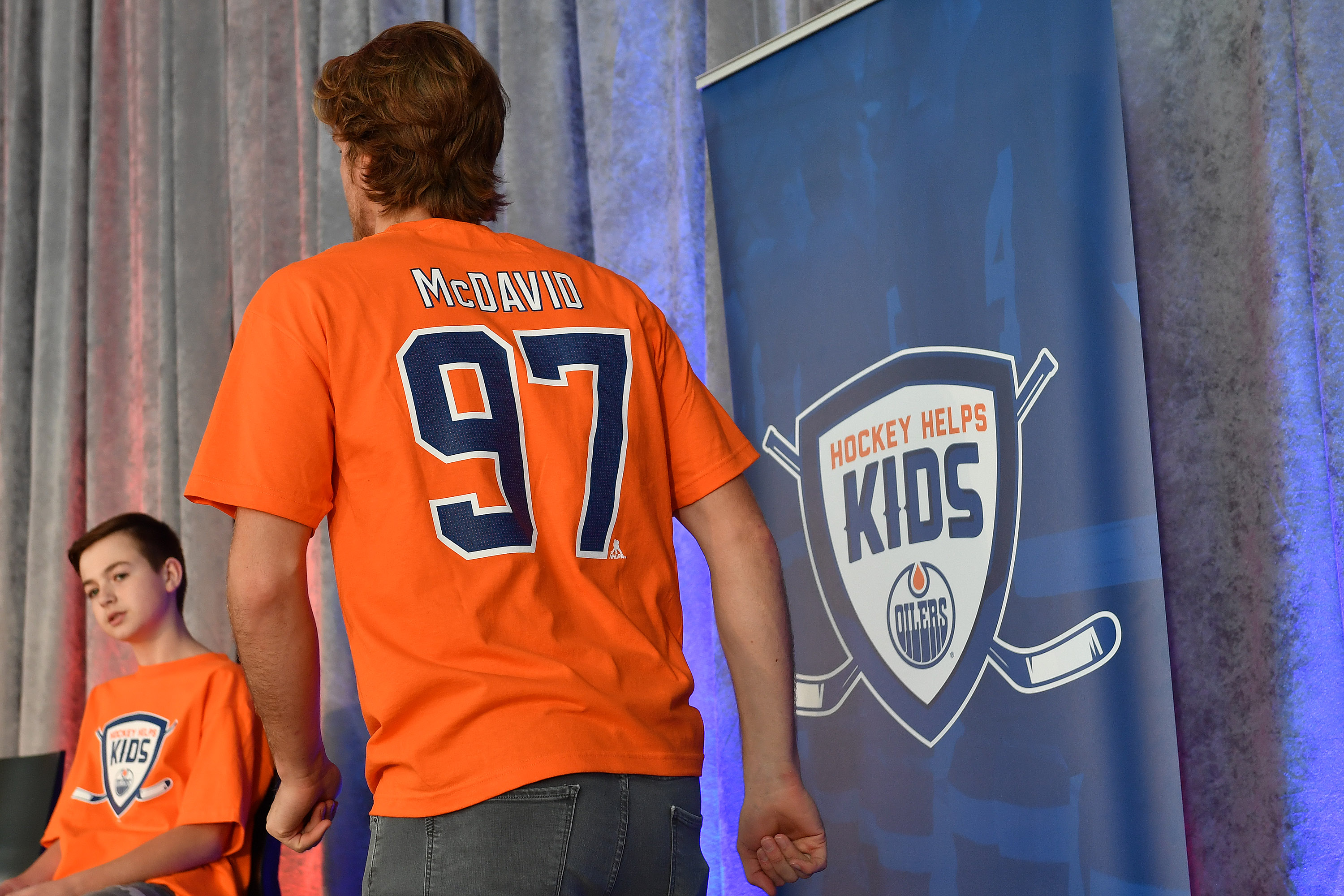 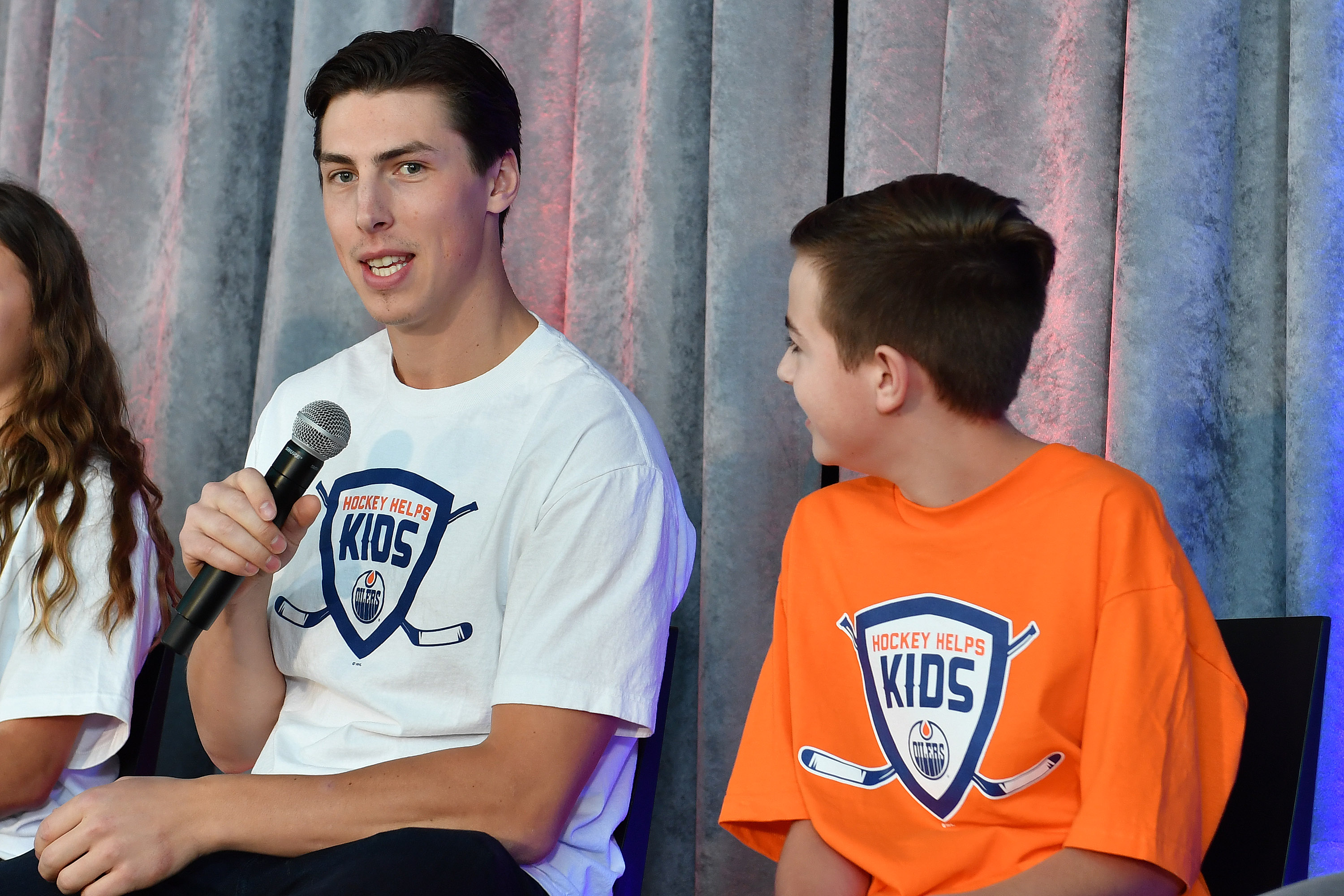 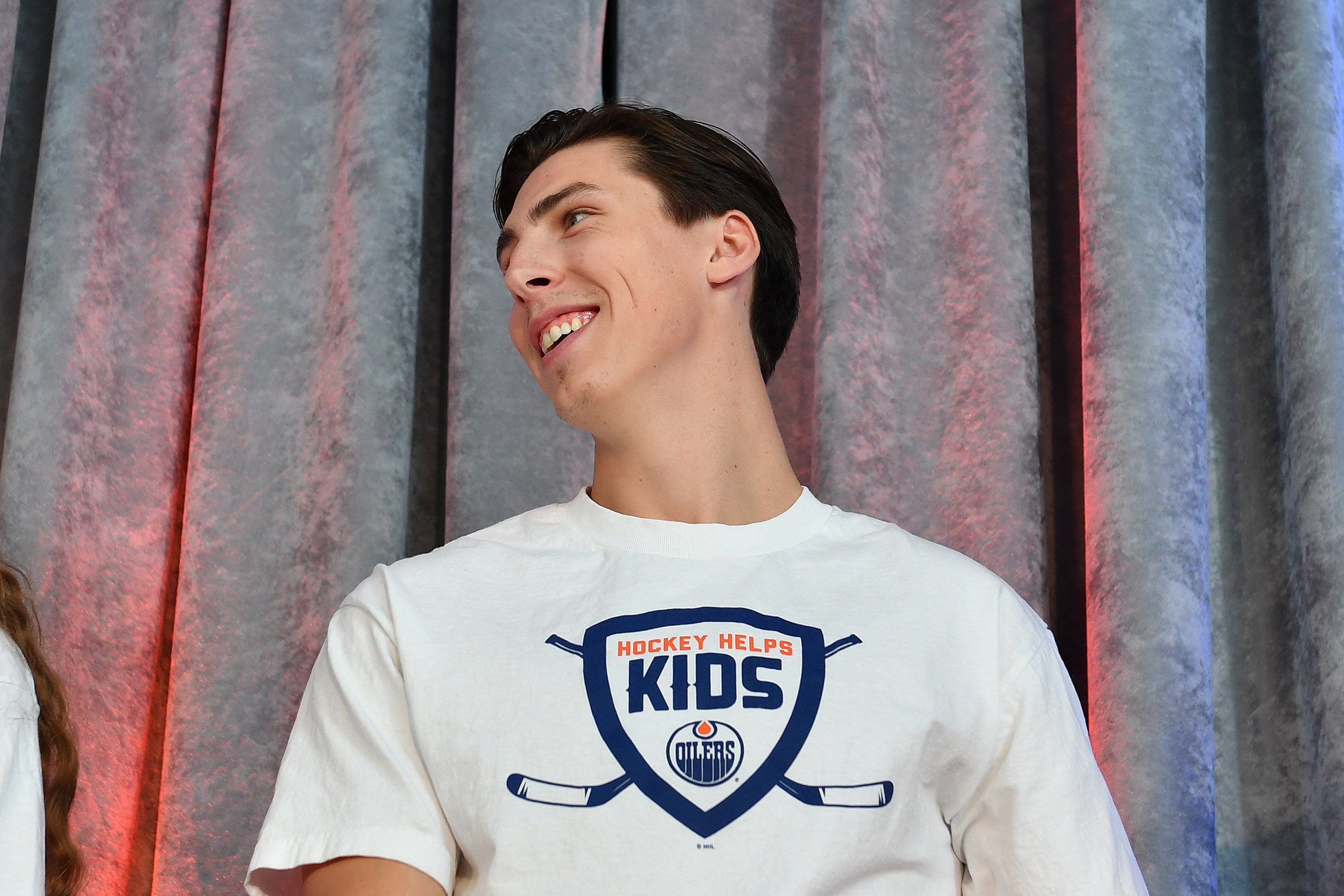 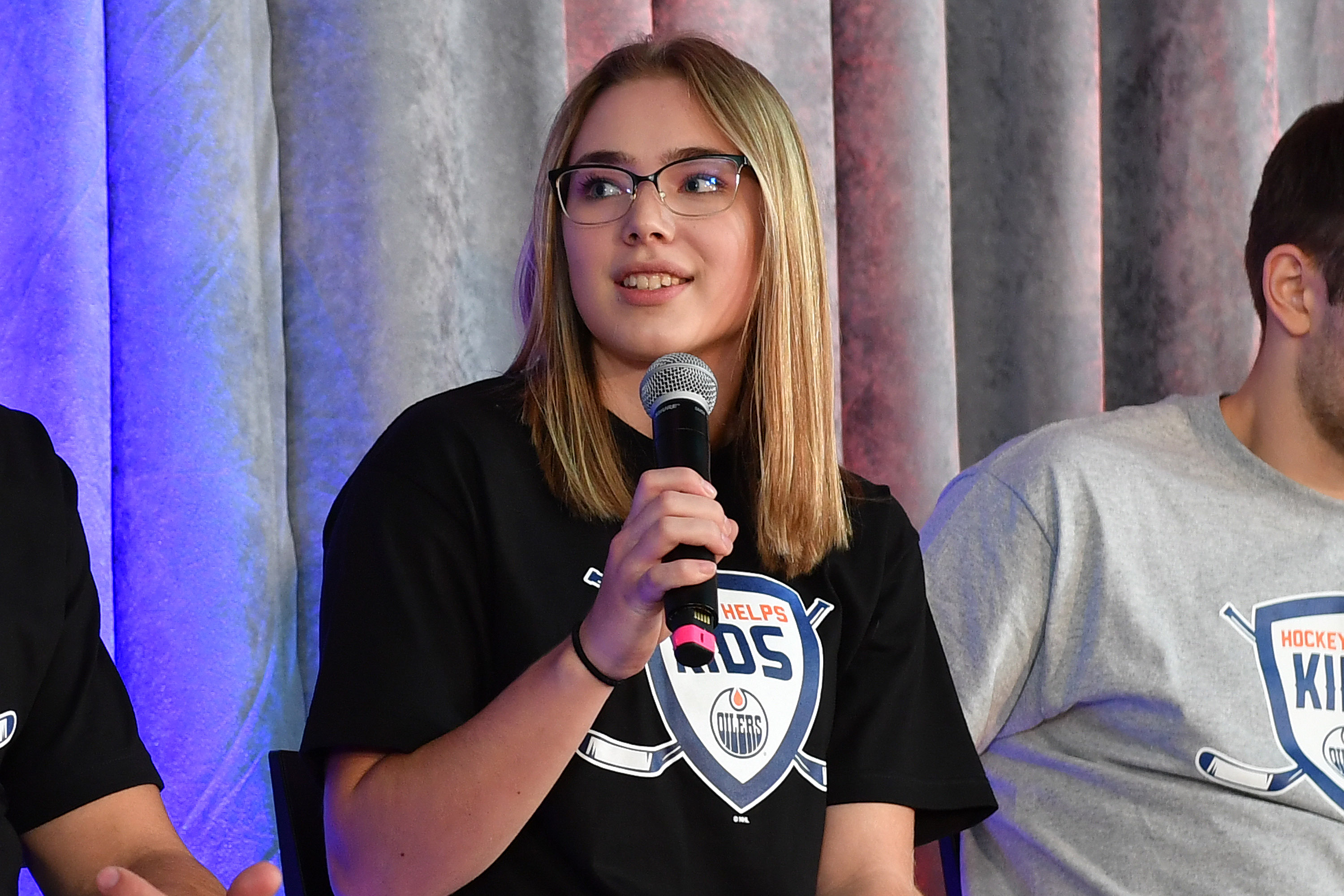 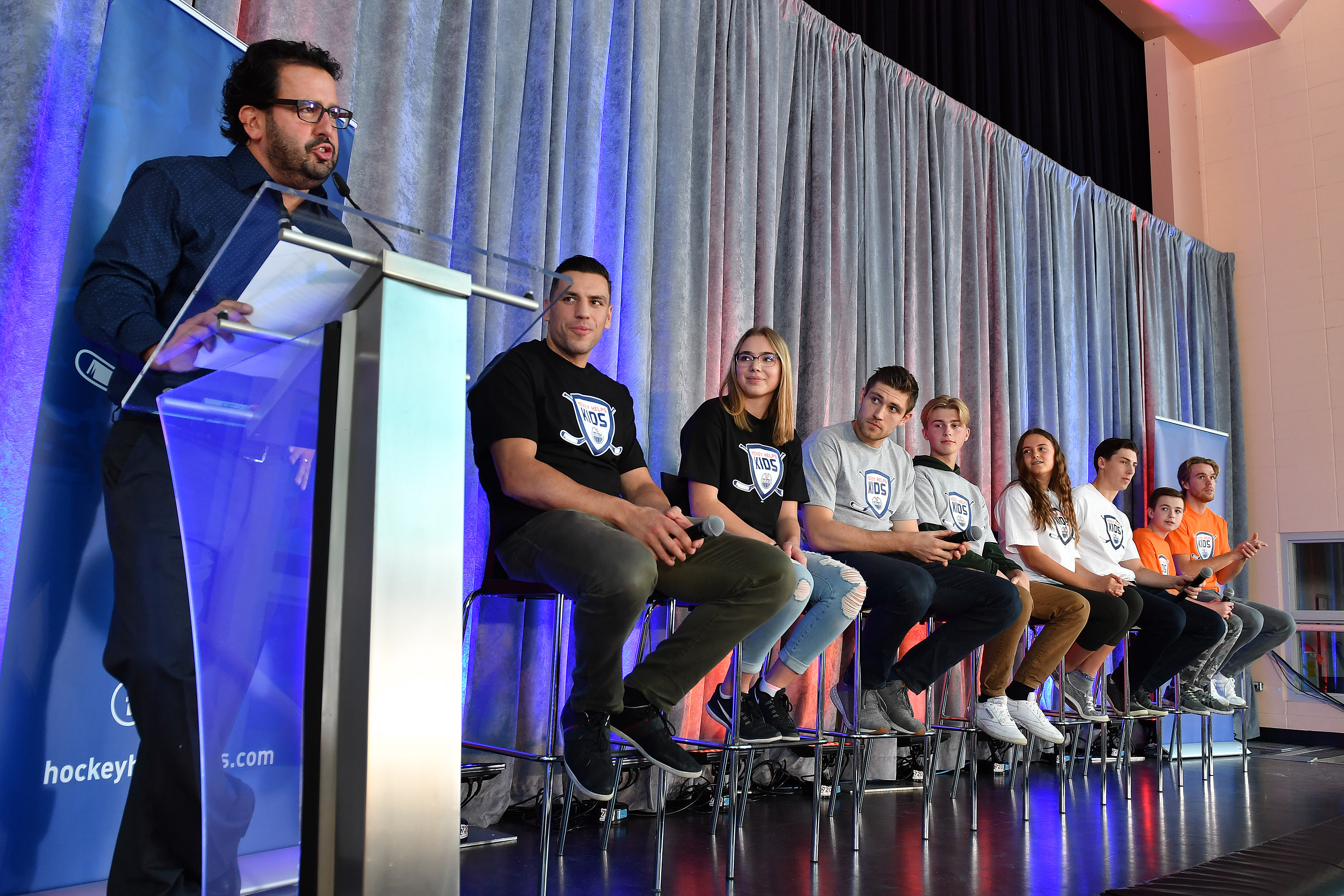 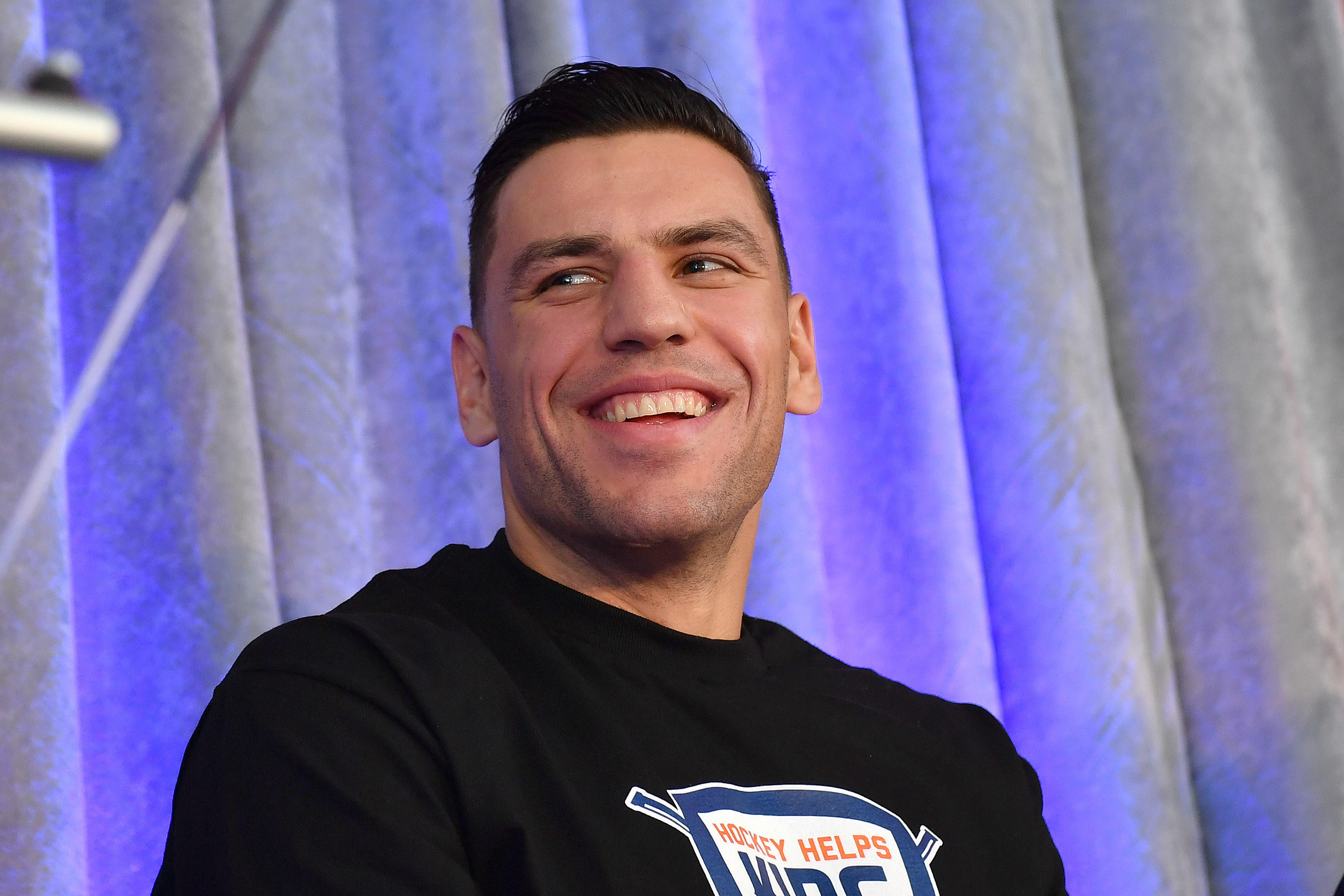 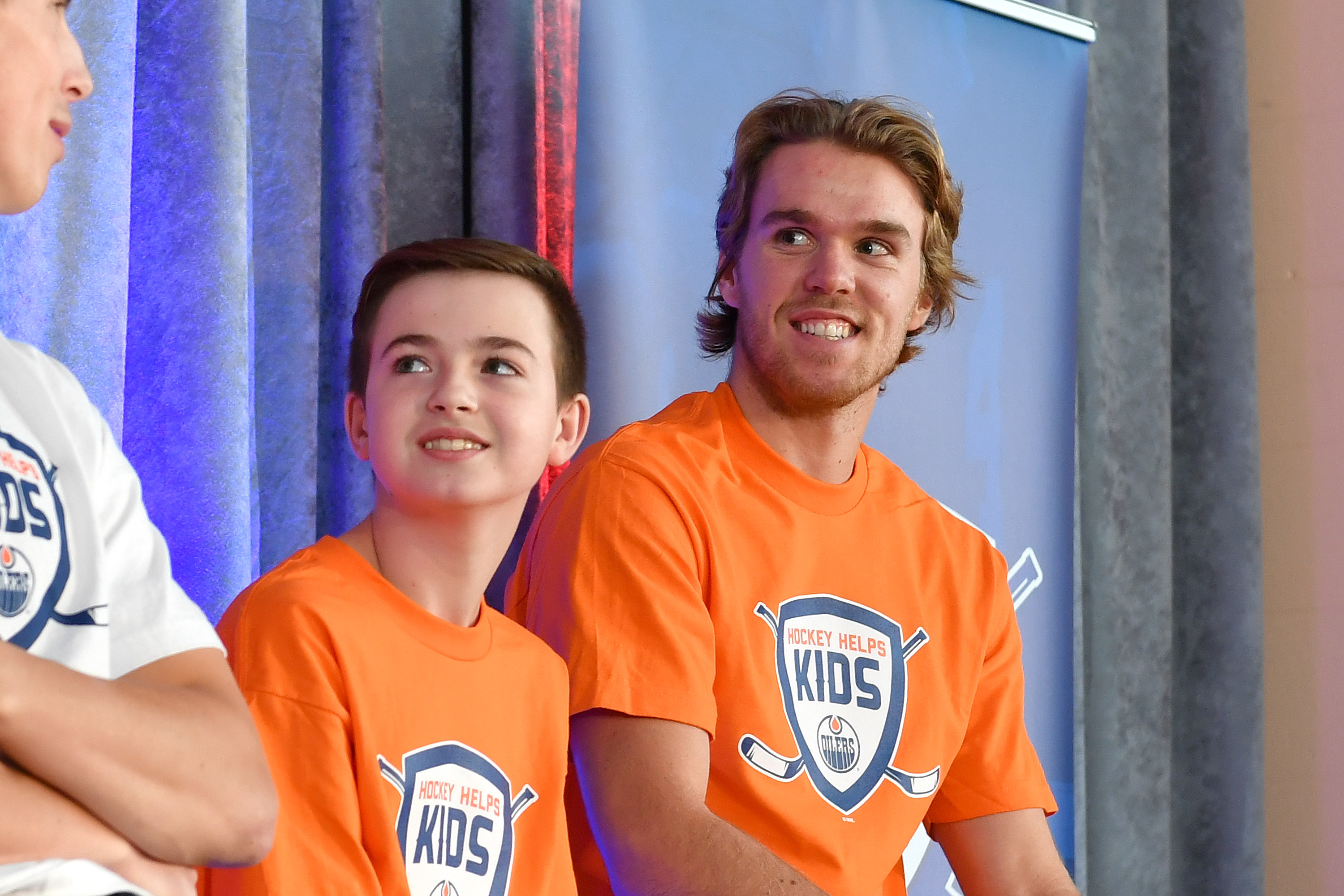 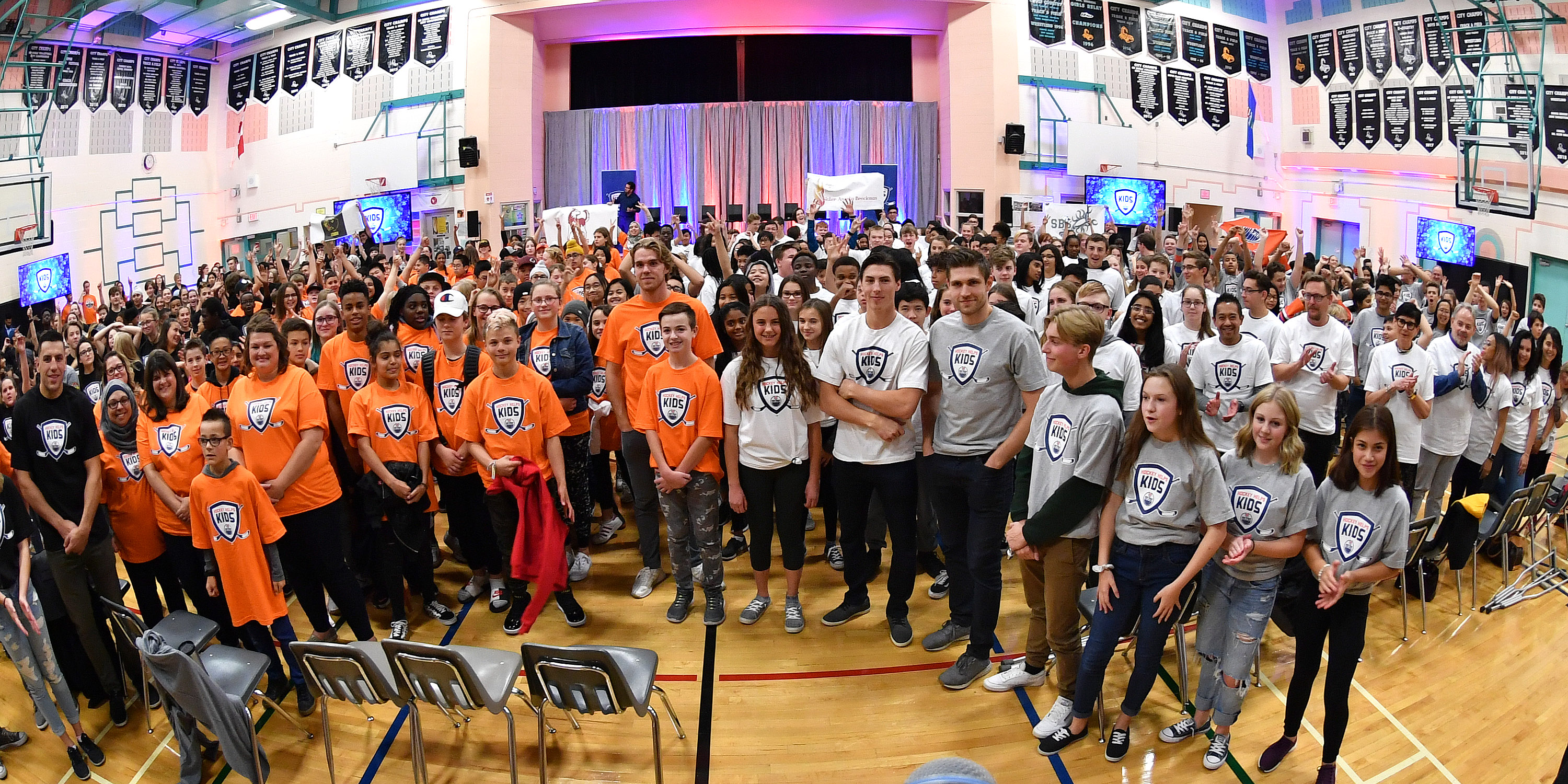 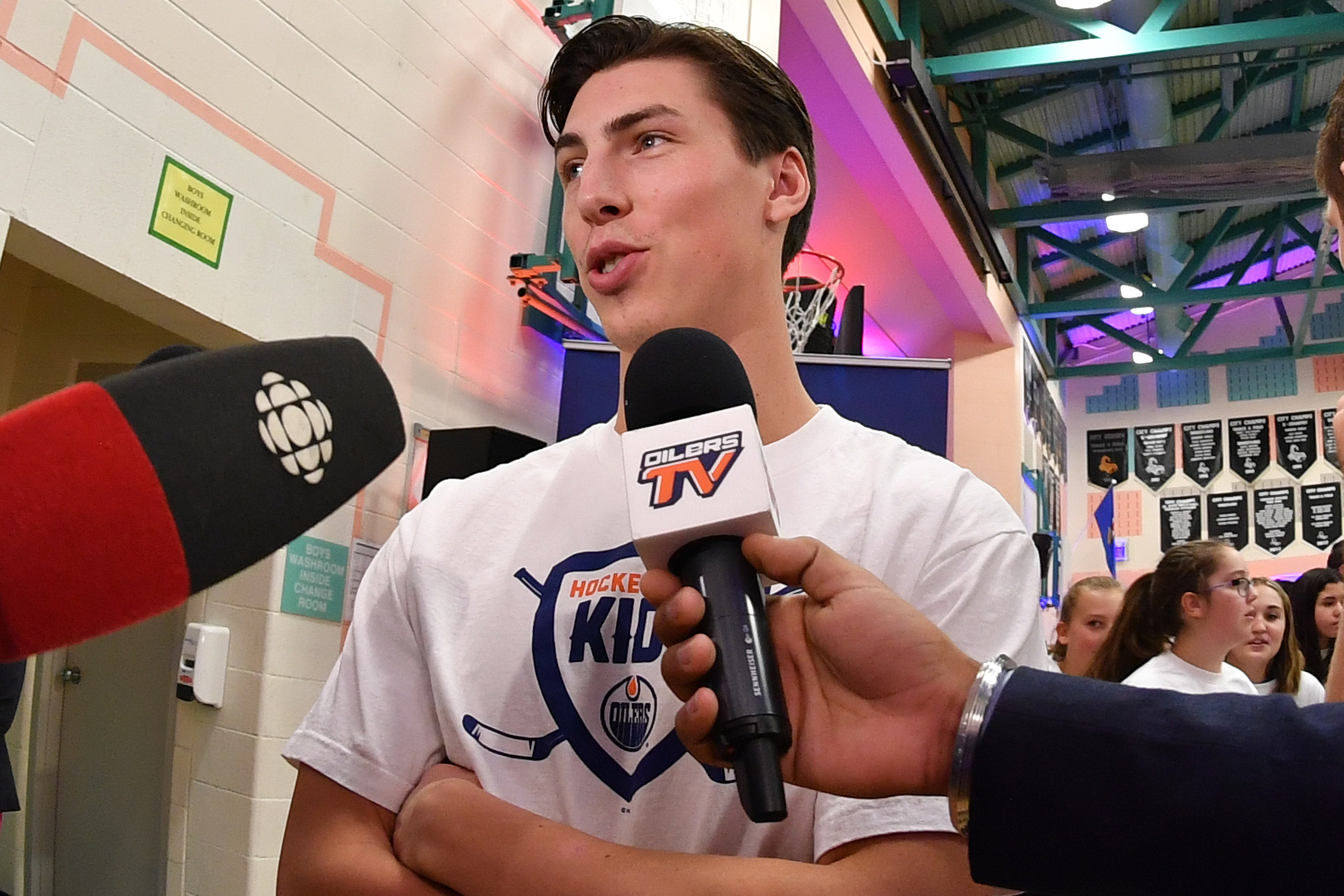 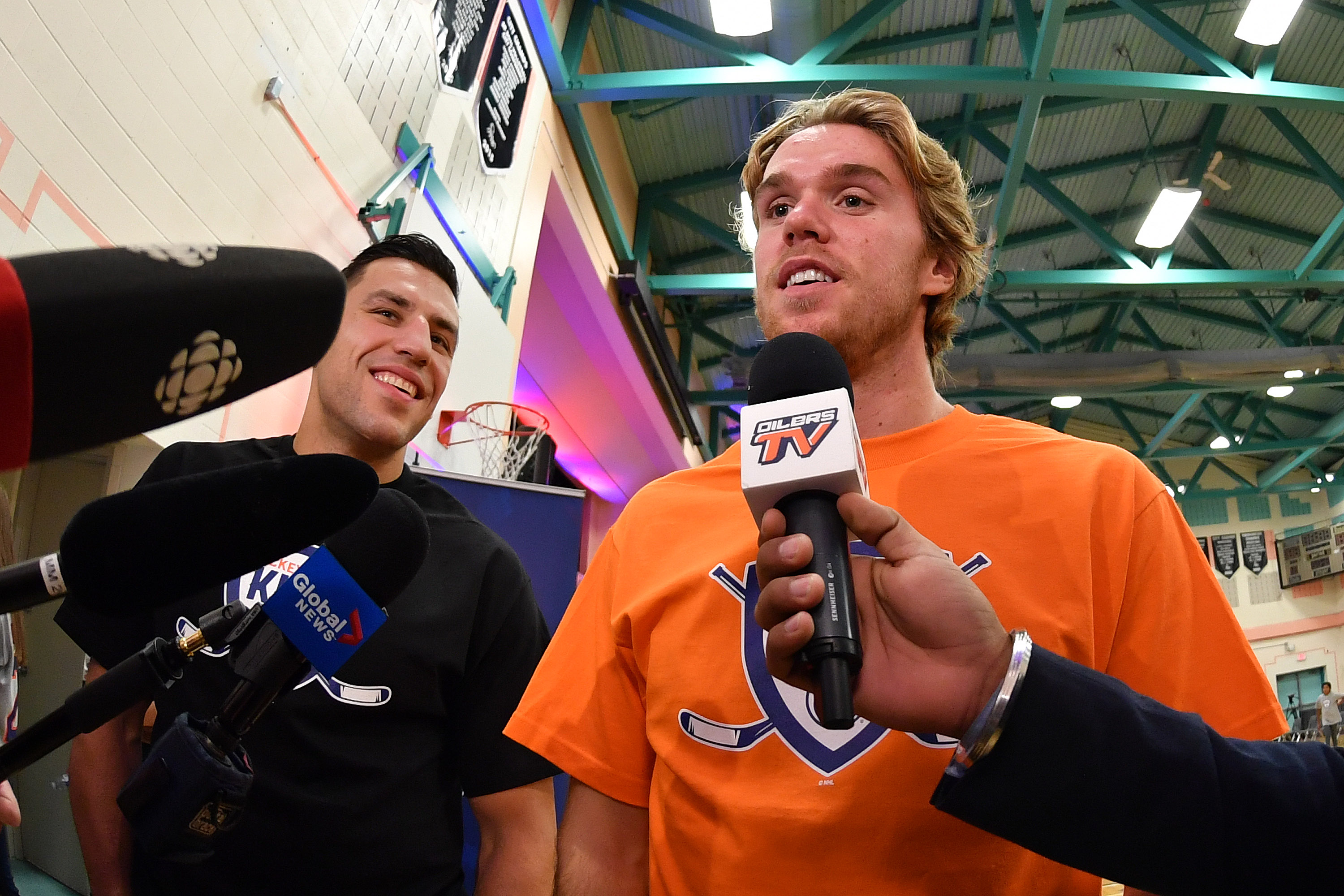 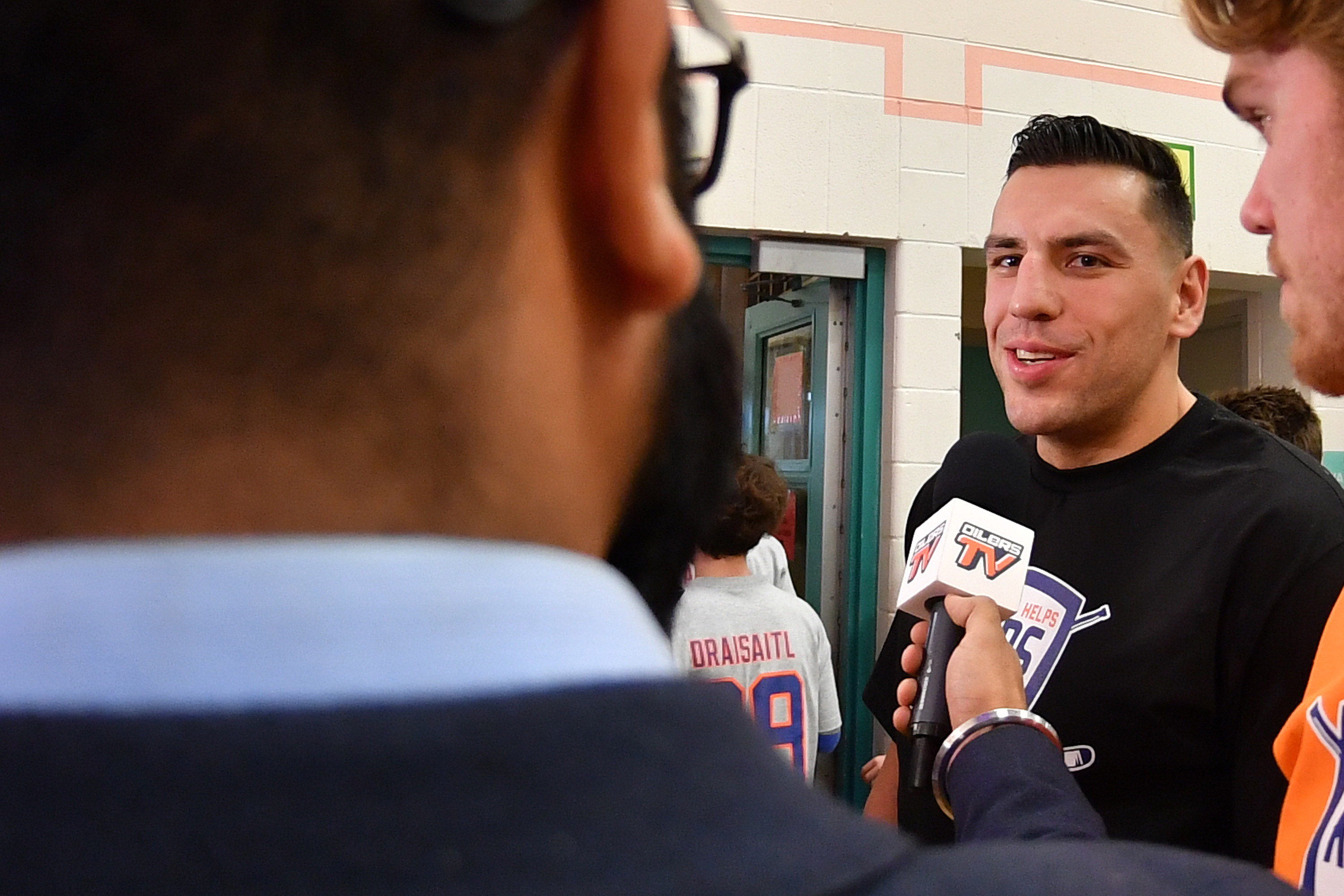 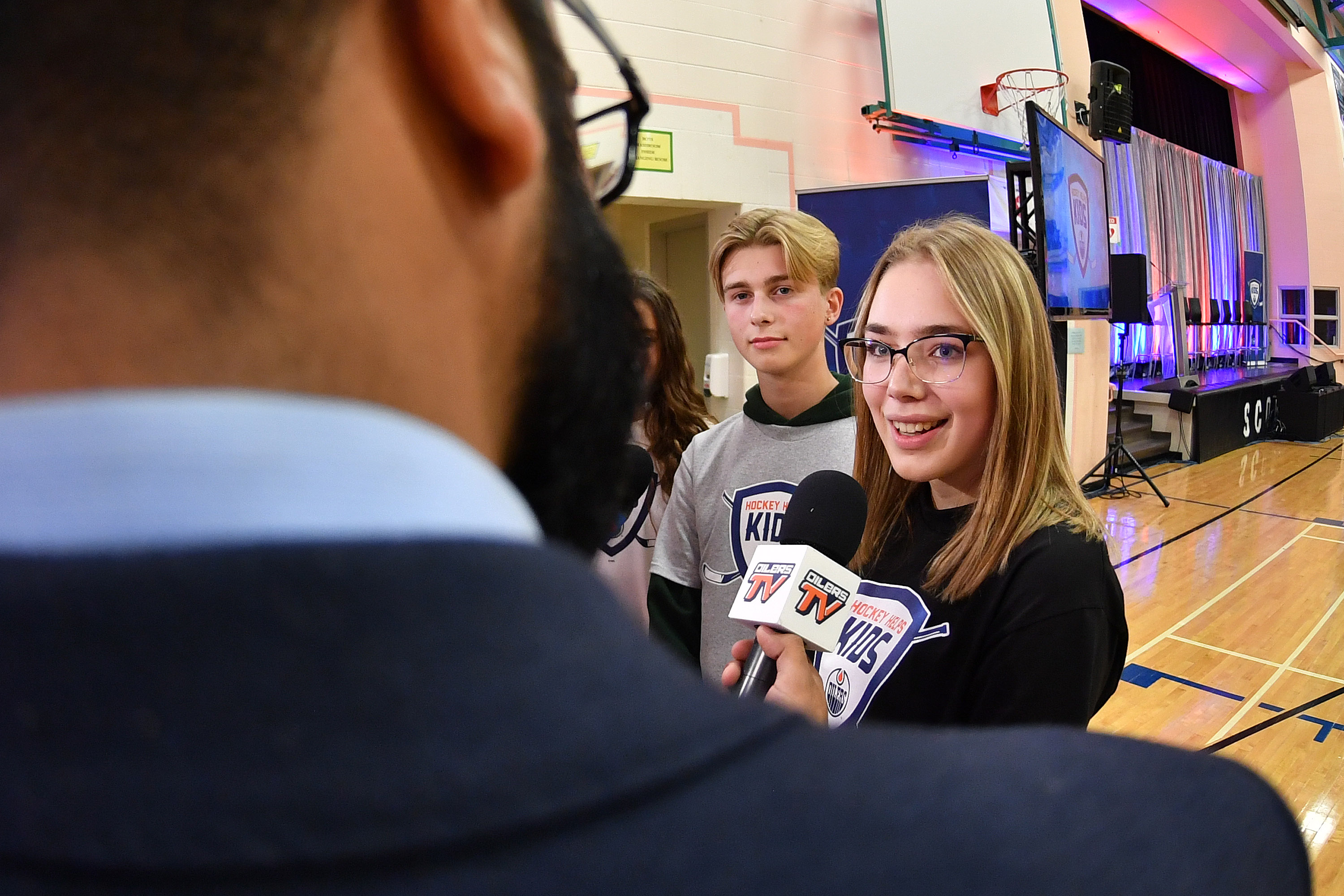 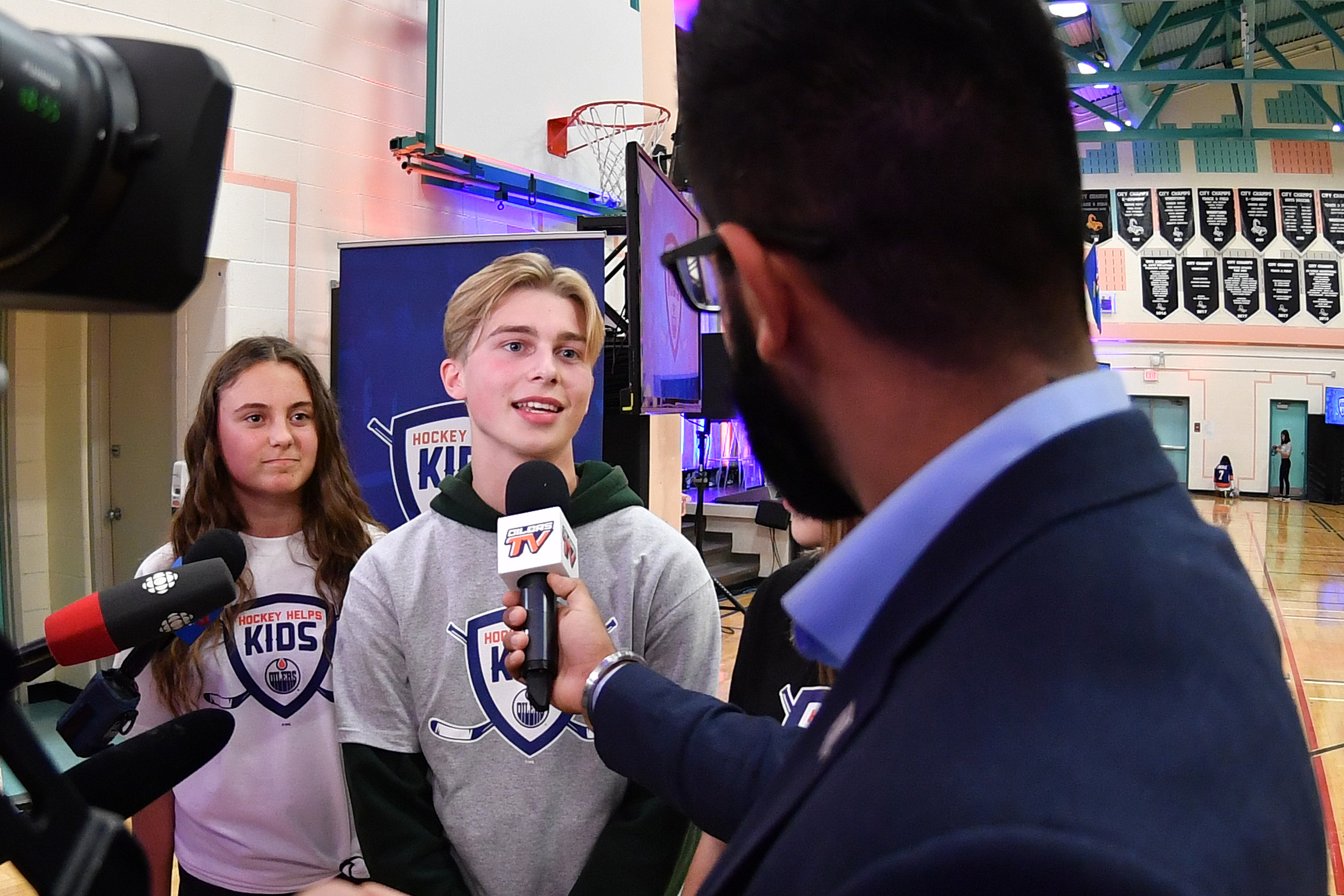 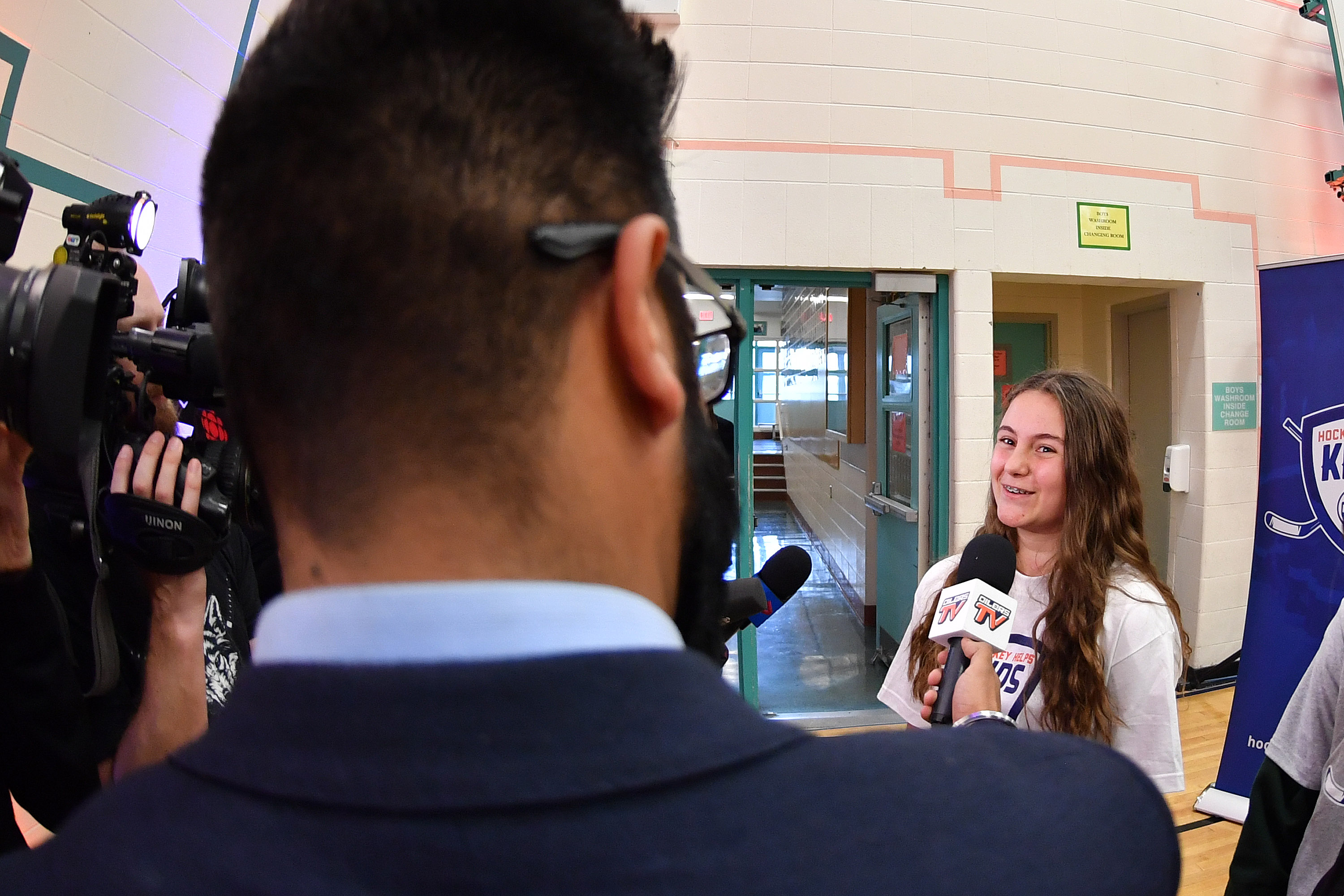 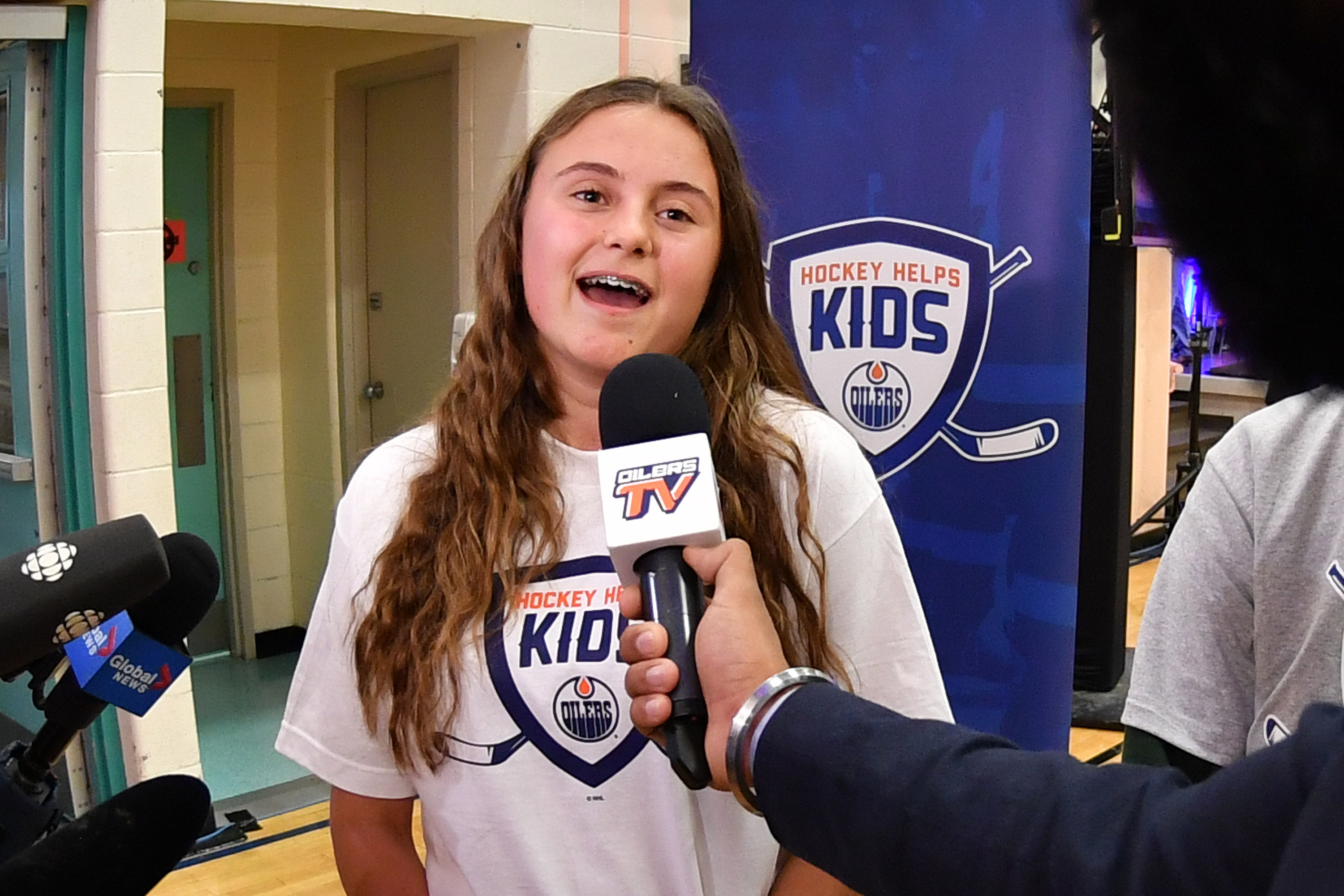 Four local schools participating in the program this year – Ecole Dickinsfield, Hilwie Hamdon, S. Bruce Smith and Sister Annata Brockman – have teamed up with four Oilers players to serve as their team captains – Leon Draisaitl, Milan Lucic, Ryan Nugent-Hopkins and Connor McDavid. The teams will compete in the Hockey Helps Kids Charity Cup Challenge to promote their charitable cause and make a difference in their community.

“We are a school that feels strongly about giving back to our community as one of our core values is citizenship,” said Hilwie Hamdon Principal Dorothy Arts. “We are very thankful to be a part of the Hockey Helps Kids organization as it gives us a tremendous opportunity to do something special. We look forward to working with our charity and the Edmonton Oilers to truly make a difference in people’s lives.”

Hockey Helps Kids, co-founded by Chloe and Harrison Katz, children of Edmonton Oilers Chairman Daryl Katz and his wife Renee, is funded by the Katz family and administered by the Edmonton Oilers Community Foundation (EOCF). The Foundation helps connect the Katz children with the four local Edmonton junior high schools and four Oilers players, who serve as team captains for each school to learn about community service.

A Hockey Helps Kids panel, which included Chloe and Harrison Katz, past student and teacher participants from Mary Butterworth and D.S. MacKenzie schools, EOCF staff and Hockey Helps Kids Educational Consultant Sandra Woitas, evaluated submissions from schools across Edmonton, and after a rigorous review selected these four schools to participate.

“Each year the proposals we receive keep getting better, making it a tough decision to pick the participating schools,” said Harrison Katz. “All four schools are dedicated and eager to get working on their projects and start making a difference for their charities and communities.”

“I love seeing which charity each school picks. There are so many worthy causes, and the students get to see what a difficult choice it can be as they interview different groups,” said Chloe Katz. “We’re always surprised that schools select such a diverse group of charities. It’s incredible to see the wide range of impact across the Edmonton community.

This past 2017-18 season, Team Nugent-Hopkins earned the most votes in the third annual Hockey Helps Kids Charity Cup Challenge and was crowned champion for the second year in a row. Mary Butterworth School won $25,000 for their charity, Dogs with Wings Assistance Dog Society. Dogs with Wings’ goal is to change lives for the better by fostering integration and independence for Albertans with disabilities by providing then with highly trained assistance dogs and aftercare.

“There is a bit of competition among the schools and the captains, but really everyone is a winner in this program,” said Oilers forward and Hockey Helps Kids Team Captain Milan Lucic. “We’re able to be role models for the students, talking about our own experience working with charities and fundraising, but the students are really the ones driving the projects. It’s great to learn about the charity they’ve chosen, their reasons for choosing the charity and collaborate on their creative video and fundraising ideas.”

In the third season, a total of 95,526 votes were cast within the one-month voting window for the Charity Cup Challenge. The fourth season of Hockey Helps Kids will continue to build on this success and provide junior high school students in Grades 7 to 9 the opportunity to learn about the importance of being active and positive members of their community. By complementing and expanding on each schools’ leadership curriculum, students are encouraged to learn skills and gain hands-on experience in giving back and making their community a better place for others.

More details on the program, including this year’s charitable causes will be announced in the coming weeks. For more information on Hockey Helps Kids, please visit HockeyHelpsKids.com, download the Oilers Mobile App or check out Hockey Helps Kids on Facebook, Instagram and Twitter.